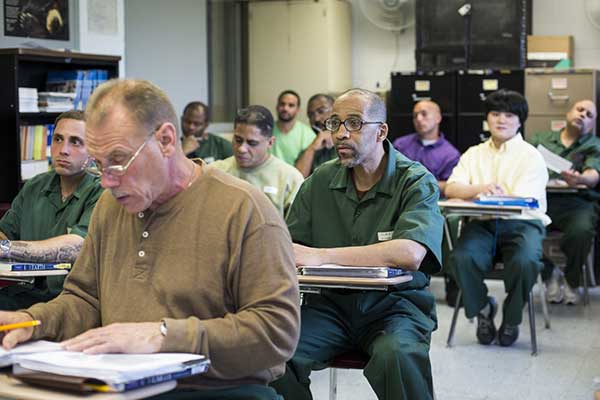 Eager hands shot up when the professor asked what factors the students might consider in developing the land. She scribbled their answers on a blackboard: location, population, land use, crime.

The students, most of them the first in their family to attend college, are inmates at Sullivan Correctional Facility, a maximum-security men’s prison.

More classes like this are expected to pop up at other New York prisons as early as this fall as the government directs funds to such programs in the state on a scale not seen in several decades. The Manhattan district attorney’s office, through an agreement with the state, has allocated $7.5 million in bank forfeiture funds for college programs, which officials expect to serve about 1,000 inmates over five years.

Meanwhile, prisoners will be eligible to receive Pell grants, the main form of federal aid for low-income college students, as part of a coming pilot program.

Last year, 1,510 New York inmates, or about 3% of roughly 52,000 in the state prison system, participated in college programs. From September 2014 to August 2015, 72 graduated with associate degrees, 46 earned bachelor’s, and 11 earned master’s, according to the state’s Department of Corrections and Community Supervision.

College in prison was once commonplace, with more than 300 programs nationwide as recently as a couple of decades ago, said Fred Patrick, who runs a college-in-prison program at the nonprofit Vera Institute of Justice. But in 1994 a crime bill signed by President Bill Clinton banned Pell grants for inmates.

“Pretty much overnight, most of the college programs in New York and across the country disappeared,” Mr. Patrick said.

Proponents of college behind bars say such programs make fiscal sense. Data overwhelmingly show that those who are educated in prison are substantially less likely to return.

“Educating people when they are incarcerated benefits taxpayers who will not be saddled with the reincarceration costs,” said Alphonso David, counsel to Gov. Andrew Cuomo, a Democrat.

Those who participate in college programs while incarcerated are half as likely to return to prison as those who don’t, even when taking into account that some types of inmates are more likely to take classes, according to an analysis by the Rand Corp., a think tank.

Of Hudson Link’s 501 graduates who have been released, five have returned to prison, said Sean Pica, the nonprofit’s executive director. Mr. Pica said he earned associate, bachelor’s and master’s degrees during his 16 years behind bars. Educating inmates costs about $5,000 per student annually, he added.

Those opposed to college programs say vocational training, not liberal arts, is appropriate for prisoners. They also object to using taxpayer dollars to fund such education.

“These are individuals who have committed crimes against society and I don’t believe that cost should be passed onto future generations,” said Rep. Chris Collins, a Republican whose district is near Rochester.

Among proponents of these programs, there is disagreement about which inmates deserve a shot at a college education. Some programs exclude sex offenders. Others ban those serving life sentences, noting that for these offenders recidivism is a moot point.

Kristen Inglis, who works for Wesleyan University’s college-in-prison program, said so-called lifers are passionate students who become tutors and teaching assistants. “They tend to be students that professors love,” she said.

For the students of Sullivan, parts of college are typical. They write papers and stay up late to finish homework.

But there are challenges, too. There is no internet. Textbooks are old. Papers are largely written by hand. Noise reverberates off the facility’s concrete walls.

“We’re in a cage,” said Gabriel Cabrera, 35, who was convicted of second-degree murder and will remain behind bars at least 16 more years. “And it’s hard to do a 10-page paper in a cage.”

To qualify for classes, inmates must keep themselves out of trouble in a volatile environment. Sullivan’s grads say they are role models for fellow inmates, and for their children and family outside.

“We just appreciate it so much more because we’ve had everything taken away,” said Gus Bethea, 33, convicted of robbery. “I never imagined I’d be a college graduate.”