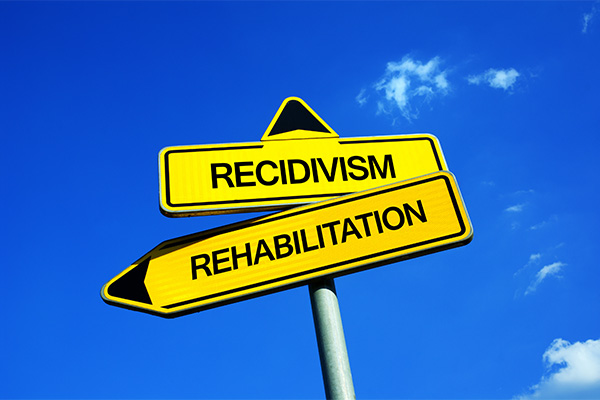 What Is Recidivism And What Can We Do About It?

With the highest incarceration rate in the world, the United States is home to an estimated 6.8 million people under supervision in the U.S. adult correctional system, according to the Bureau of Justice Statistics. That number — 6.8 million — equates to approximately one in 36 (or 2.8%) adults in the United States. Of those, almost 2.8 million have been incarcerated in prison or local jails.

For a system meant to rehabilitate, an alarming number of incarcerated individuals are repeat offenders and returning inmates, an occurrence known as recidivism. Recidivism refers to a person’s relapse into criminal behavior. It’s measured by criminal acts that result in re-arrest, re-conviction, or return to prison. According to the Bureau of Justice Statistics, 67.8 percent of over 400,000 prisoners released in 2005 in 30 states were arrested within three years of release, and 76.6 percent were arrested within five years.

How can we effectively address the consequences of incarceration in our country?

The Power of a Second Chance
Several societal factors contribute to the high incarceration rates in our nation, and none of them is solved easily or quickly. One of the most significant contributors to these numbers is recidivism. Reducing recidivism rates lessens the burden on incarceration systems, taxpayers, communities, and families. By investing in the needs of individuals exiting the corrections system, we can ensure people return to their communities equipped and motivated to contribute to society in sustainable, mutually beneficial ways.

The question is, how can we do that? The dynamics of recidivism are numerous and complex. Offenders are often undereducated, underemployed, and living in poverty, facing monumental societal and environmental obstacles even before they enter the correctional system. Upon release, most face those same obstacles, compounded by the stigma of a criminal history.

But, there is hope.

Organizations across the country are serving the prison population in creative, long-term ways to help empower individuals to successfully transition back to their communities, while also lowering recidivism rates. By focusing on educating, investing in, and caring for the person, these groups make a lasting difference in individuals, families, and communities.

Effective re-entry services wrap around the individual to address the various obstacles that face someone rejoining society. From educational resources to job training, services help fill the gaps left by the criminal justice system.

S+ Catalyst Root & Rebound provides educational and legal resources to individuals and families navigating the overwhelming and complicated process of re-entry. With over 44,000 legal barriers to reintegrating — housing, financial, employment, and more — people without access to legal resources are set up to fail rather than succeed. With approximately 650,000 people leaving prison and jail a year, the vast majority faces a reality of homelessness, unemployment, and re-arrest. Root & Rebound exists to equip these individuals with the tools and knowledge they need to start over.

S+ Catalyst Defy Ventures transforms the lives of people with criminal histories through entrepreneurship, mentoring, and business training. By leveraging the entrepreneurial skills of individuals to create legal, profitable business, Defy helps incarcerated and formerly incarcerated individuals shift their perspective and find a sustainable path to success. Their holistic support fosters personal and character development that sets a strong foundation for business success. With a less than three percent recidivism rate for their entrepreneurs, Defy is making a tremendous impact in the lives of men and women, families, and communities.

Prison education is key to giving inmates a chance at rehabilitation so they return to their communities more educated and prepared for the workforce than when they left. Many enter the system at a young age from poor communities, underperforming schools, and hopeless situations. The opportunity to receive an education while in prison provides inmates a chance to change the trajectory of their lives. Programs like Hudson Link partner with colleges to bring degree programs to prison. With less than four percent recidivism for their graduates, Hudson Link is changing the lives of men and women through education, while also lightening the burden of incarceration on states and communities.

Programs like these believe in second chances and prioritize the individual. Single digit recidivism rates result, in stark contrast to the state and national rates of 40, 50, or even 60 percent. But, it’s not just about the numbers. These organizations are changing the lives of individuals who are better equipped to contribute value to society, and the positive effects permeate families, neighborhoods, and communities for the better.