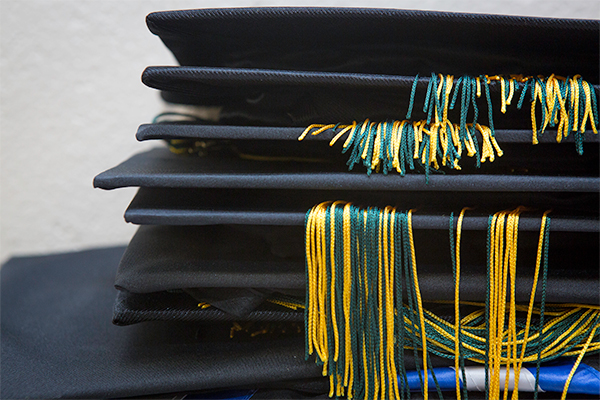 On Wednesday, June 21st, 2017 Hudson Link celebrated the accomplishments of the most recent class of graduates from SUNY Sullivan’s associate degree program at Sullivan Correctional Facility. All 19 graduates were sporting gold cords to mark their places on the SUNY Sullivan Dean’s List!

Sullivan’s third graduating cohort was represented by student valedictorian Robert Ehrehberg and co-salutatorians Stanley Bellamy and Eldredge Blalock, all of whom gave speeches that were touching, powerful, and hopeful. Thanking their families, professors, and administrative support staff, the student speakers proudly congratulated their peers and promised to continue their educational pursuits.

Continuing their education will be all the more possible now that Hudson Link has announced the Fall 2017 launch of a Bachelor of Science in Sociology degree program for 24 students at Sullivan Correctional Facility, in partnership with St. Thomas Aquinas College.

In his concluding remarks to the esteemed graduates, Acting Commissioner Anthony Annucci left the room with a powerful message. “I don’t know the men graduating today personally,” he began, “but I know something personal about each one of you. I can look each of you in the eye and say with certainty that you were not born to be a criminal justice statistic. I believe we are all put on this earth to make the world a better place and that you can all do that, starting with this magnificent opportunity to pursue higher education.”

It was especially moving to see student Ian E., who was released from Sullivan C.F. before finishing his degree on the outside, return to the facility to walk with his classmates on graduation day.

The 2022 Spring Benefit Award Winners Are……

This Giving Tuesday, Give Comfort

5 Things Hudson Link is Thankful For

Watch the Rest of the Videos from TEDxSingSing NOW

Forging Their Own New Path

This year on Giving Tuesday, we are asking our community to help us provide our released alumni with some of the essentials as part of our Giving Comfort campaign. All donations of brand new items help us so we can provide underwear, undershirts, socks, cozy sweats, and other basic necessities.