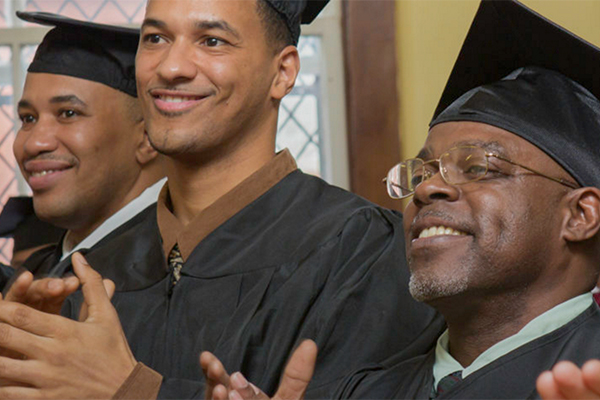 Up the River: How a College Degree Helps Give Men and Women a Second Chance

For many incarcerated in Ossining, New York’s Sing Sing prison, the freedom granted to them after serving their sentences is illusory: Within three years, 42 percent of New York’s released inmates will find themselves locked up again, or “up the river” — that is, the Hudson River, upon which the prison sits, and from which the saying is derived.

Re-entry into the workforce can prove unforgiving to former inmates. The stigma surrounding the past of these men and women can render job-hunting an almost futile exercise, and since many were first incarcerated as teenagers, they lack the formal education to effectively enter the competitive job market. Indeed, 61 percent of inmates have fewer than eight years of education. Without other options, many return to crime — and find themselves up the river again.

There is a solution — as the organization Hudson Link has found over almost two decades of lasting success — through the gift of education. By providing men and women with a record with an invaluable education, Hudson Link has seen a dramatically reduced recidivism rate among its students: a mere 4 percent, much less than the 42 percent average for New York.

What does this dynamic improvement mean for society? It costs the state of New York approximately $60,000 to incarcerate one individual per year; it costs less than 10 percent of that to afford former inmates the opportunity to pursue a college degree and succeed outside of prison — and stay out. Each year, more than 500 students enroll in Hudson Link’s educational programs, and many return to their families and communities. Inmates pay $10 dollars per semester, using the money they’ve made from working in prison.

“Everyone has second acts.”
On Jun. 7, at their Sing Sing graduation commencement, Hudson Link distributed 13 associate and 23 bachelor degrees in behavioral science. Sean Pica, the executive director of Hudson Link, and a former inmate himself, noted Hudson Link’s growing popularity and success during the Sing Sing graduation, at which Usher and Harry Belafonte were present: “It’s our single largest graduating class, and the largest graduating class in the New York State Department of Corrections,” he said. “What we’ve seen over the past 17 years is students go through this program, return to their communities, and do very, very important things. They become role models.”

Syndicated columnist and Pulitzer Prize winner George Will, who was also in attendance, said on the graduation, “The message is that second chances work. The great novelist F. Scott Fitzgerald said that there are no second acts in American life. Wrong. Everyone has second acts. These people are heading for a second act.”

The achievement does not end there: Those graduates often go on to work in careers in social services, where they assist vulnerable members of their communities in finding their own success. Hudson Link’s graduates pay it forward, making their educational tools the gift that keeps on giving. To date, Hudson Link has awarded 500 college degrees. For those 36 degree-carrying men and, indeed, for all 500 degree-holders helped by Hudson Link, education is not merely a path to stay out of prison — it also marks the road to a fulfilled and successful life, with the opportunity to start anew in a stable, legal, and honorable profession. Hudson Link’s graduates can feel a sense of pride and dignity when they re-enter their communities and families as role models, with the skills and principles necessary for success and a fulfilled life.

The Path Forward
Hudson Link doesn’t just help those who are currently incarcerated. To ensure that its students experience continued success in their communities post-release, Hudson Link provides them with a laptop, business attire, and continued classes and networking events to assist them in integrating back into the workforce and civil society. The combination of intentional community, education in the principles and habits demanded in the workforce, and the provision of useful tools and skills to achieve success transforms these individuals with a sordid past into those with a bright future, of which they can be exceedingly proud. To date, over 600 alumni of Hudson Link have returned to their families and communities.

Today
Hudson Link has partnered with seven colleges, and provides education to inmates in six correctional facilities. They are working to export their model to be replicated in five additional states, to ensure that even more inmates have a chance at a brighter future. For many, their re-integration into society is a long way away, as many are still serving long sentences. But when they return, they are already on a faster path to success. The students of Hudson Link have ensured that they won’t be making a return trip up the river.

Stand Together is partnering with Hudson Link to brighten the future of America’s men and women with a record by keeping them out of correctional facilities, returning them to their families and communities, providing them with a life-changing education, and equipping them with the tools to succeed in a competitive workforce. Join Stand Together in making a change in the culture of our correctional system and a transformation in the lives of its inmates.