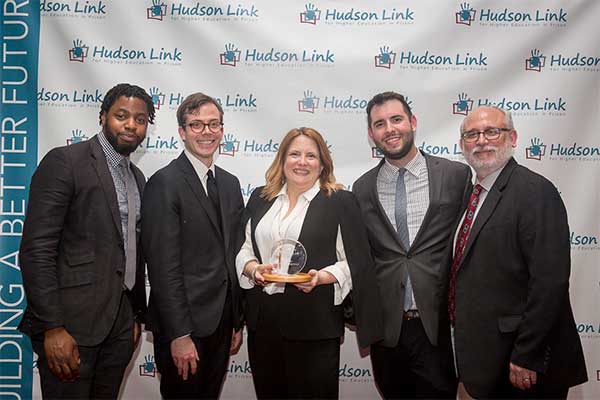 On Thursday, May 17 the Jacob Burns Film Center (JBFC), a nonprofit cultural arts center and one of the most successful suburban art house theaters in the country, received the Bill Webber Community Service Award at Hudson Link’s Annual Spring Benefit Dinner hosted at the Grand Hyatt New York. This year’s benefit dinner marked Hudson Link for Higher Education in Prison’s 20th Anniversary. For the past two decades, Hudson Link has provided college education, life skills, and re-entry support to incarcerated and formerly incarcerated men and women to help them make a positive impact on their own lives, families, and communities.

The Bill Webber Community Service Award is given to an individual or organization who reaches out with compassionate care to those members of society who have been disenfranchised. The JBFC was honored for donating hundreds of hours of time and expertise in filmmaking to produce promotional and documentary videos capturing the work and mission of Hudson Link.

Edie Demas, Executive Director of JBFC, accepted the award on behalf of the film institution. Hudson Link Co-Founder John Valverde was also honored at the event with the Brian S. Fischer Award, given each year to a formerly incarcerated leader making a difference in the world.

Brooklyn Demme presented JBFC with the award. His late father and frequent collaborator, Academy Award-winning filmmaker Jonathan Demme, was an advocate for prison reform and, in collaboration with the JBFC, spearheaded the TEDx Sing Sing conference in 2014. Demme served as an active and dedicated board member of the JBFC for nine years, was a mentor to students and staff, and much more, making Brooklyn’s presentation all the more poignant. Later this year, the JBFC will bring back Jonathan’s Rarely Seen Cinema series with the blessing of the Demme family.

“As part of our mission, the Jacob Burns Film Center strives to influence our community and culture through the arts. Many of our ongoing series are dedicated to showcasing the untold stories around important cultural and global issues,” said Edie Demas. “We were happy to use our resources to help support and promote the important mission of Hudson Link and we’re truly honored to receive the Bill Webber Community Service Award.”

Located in Pleasantville, NY, JBFC strives to further their mission by sparking dialogue and encouraging the acceptance of a diversity of perspectives among their theatergoers and community.

Jacob Burns Film Center is a nonprofit arts and education hub located on a three-building campus in the New York Metro area. The JBFC brings the transformative power of film to the surrounding community through unique programming and discussion, shared experiences, and educational initiatives. Since opening in 2001, over 3,000,000 people have enjoyed the best of current American and foreign cinema, unique film series, and special events at the five-screen theater complex. A pioneer in visual literacy education, the JBFC offers courses in filmmaking, screenwriting, animation, and more for students of all ages at our state-of-the-art Media Arts Lab, and develops media literacy curricula for schools throughout the region.