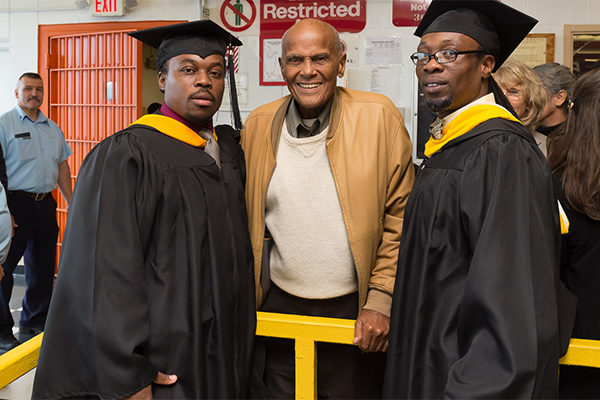 On June 7th, 2017 Hudson Link celebrated the accomplishments of Sing Sing’s Class of 2017 along with two major program milestones: not only was the class of 36 graduates the largest in program history, but we also awarded the 500th Hudson Link degree!

In a moving keynote address Dr. Reed reminded the graduates of the accomplishments of the great Nelson Mandela, who himself pursued a correspondence degree while serving what he was told would be the rest of his natural life in prison.

Valedictorian and class speaker Sequan Prude further inspired those in attendance, including his classmates – 60% of whom were graduating with honors – with the words of Franz Kafka: “‘There are some things one can only achieve by a deliberate leap in the opposite direction,’” he quoted. “The men you see here decided to take that leap, and Hudson Link together with Mercy College became our springboard. We did more than enroll in a prison college program; we joined a community, a community whose culture is empowerment through education.”

There wasn’t a dry eye in the house as Mercy College President Tim Hall conferred the degrees along with Provost Dr. Jose Herrera. For one glorious day our students weren’t in prison, but at their college graduation.

“The depression and the lack of hope that settles in after doing time could leave you to feel as though there is no end, there is no positive restart,” Usher told RNN news cameras after the ceremony. “But that’s not true if you look at these men. Having this education under their belt definitely moves them in a positive direction, but also gives them something to stand on.”