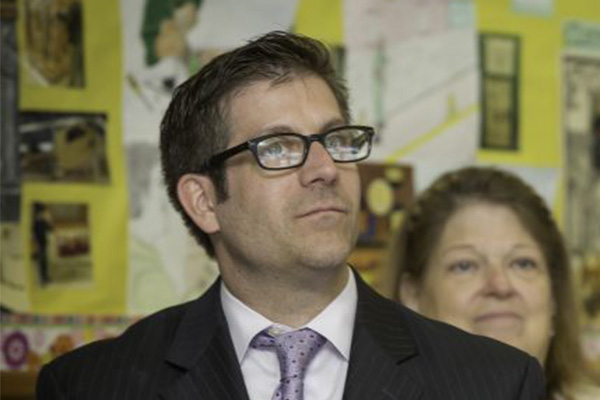 How One Man Found Redemption Through Education

“I woke up in a place I didn’t know existed. I thought my life was over.”

These are the words of Sean Pica, who found himself in prison at the age of 16, staring down a 24-year sentence. Young, shy, and ashamed of what he’d done, Sean found himself trying to grow up and survive in prison – all at the same time.

While most inmates serve their sentences in one, maybe two prisons, Sean saw nine prisons over his 16-year tenure in the New York correctional system. Disciplinary issues took him in and out of solitary and sapped him of purpose.

“It didn’t make sense to care about anything.” In the beginning, Sean kept his head down, stayed quiet, and just tried to survive one day at a time.

Fast forward nearly 30 years later, and Sean Pica is now the executive director of Hudson Link for Higher Education in Prison, an organization committed to providing college education, life skills, and re-entry support to incarcerated and formerly incarcerated men and women. His story is one of redemption, hope, and community.

Education is a Commodity
As a ninth grader in prison, Sean was one of the most educated men in his facility. In the late 80s, inmates had one five-minute phone a call month to communicate with their families. Otherwise, they could only write letters to loved ones. Without the ability to read and write, inmates quickly became isolated. When an officer asked for his help, Sean began reading children’s books to fellow inmates, and men hung on his every word, eager to learn how to read and write. He quickly realized that education is a commodity when you don’t have it.

“I’m not a tough guy. To be there [in prison] and have the biggest guy on the block looking for Sean – it’s never a good thing.”

Inmates began coming to Sean for help communicating with their families. As they did, he began to witness the community that education fosters in a culture where you don’t do anything for free. Unexpectedly, Sean uncovered the power of service.

Big Al, an inmate who measured up to his name, recruited Sean to participate in a community youth program that brought troubled teens into prison once a month. Sitting among teens his age, Sean began sharing his perspective about prison and family — what it’s like to feel like you let everyone down. Sean vividly recalls breaking down in tears — the first time he had cried in years — as he talked to teens his age. Vulnerability began knocking down walls, and something changed that day.

Through participation in the program that eventually led to leading it, Sean learned how sharing his story in a way that helps others is truly healing. He credits those experiences as a turning point in his life. The next turning point would come when he got into college.

“I signed up for college for no other reason than to be able to talk with my parents about something.” What started as a way to drum up conversation turned into over 400 college credits, a bachelor’s degree in organizational management from Nyack College, and two master’s degrees from New York Theological Seminary and Hunter College. He credits the education he received in prison and through Hudson Link for setting him up for survival both in the system and post release. “I grew into myself and came out of my shell,” he shared. Sean came out of prison in 2002 with an opportunity for a second chance.

A Culture and Community of Second Chances
Without an opportunity to improve himself in prison, Sean reflects, he would have returned to his community two decades later no better than when he left it.

Perhaps surprisingly, the value of the degrees he earned while in prison did not come in the letters after his name or a framed piece of paper.

“My life didn’t change when I got that degree on the stage. The curriculum and academic rigor have nothing to do with the success. We fostered community in a place where you’re not supposed to have a community.” The men inside these prisons, Sean explains, are the toughest on the block. Their mantra is I can do it on my own until they walk into a class where they are told no one can do it on their own.

“The one way to keep a prisoner a prisoner is to keep him from having a community. When no one talks, the largest cell block is merely a warehouse.”

Over the course of pursuing a degree, each individual embarks on a personal journey of learning, healing, and restoration — the benefits of which reverberate into their families and communities upon release.

The Hudson Link educational programs provide inmates a path to return to their communities as productive, tax-paying citizens who positively influence their neighborhoods. In New York, the cost of incarcerated individuals adds up to millions every year at nearly $60,000 per person. Hudson Link degree programs cost $5,000 per student per year, funded 100 percent through private donations. Compared to the national recidivism rate of 42 percent, only four percent of Hudson Link graduates have returned to prison after their release. Hudson Link is saving the state of New York millions of dollars, on top of the additional costs to society from criminal justice, lost productivity, and victim costs.

Their programs don’t stop once a student has completed a degree.

Support programs for alumni seek to create community and guide formerly incarcerated individuals once they are released. Upon release, each receives a laptop and business attire and can participate in monthly networking dinners. Hudson Link alumni are well-equipped to rejoin society, and most find employment within six weeks. These services, which include job readiness programs and professional development, help give each graduate the best chance for success.

Hudson Link Today
Today, Hudson Link is active in six correctional facilities — some maximum and some medium security — and partners with seven colleges to offer degree options in behavioral sciences and liberal arts. These degrees equip the formerly incarcerated to serve their communities through various social services where their convictions don’t hold them back.

Hudson Link has helped five states implement their model, and with additional funding, they plan to continue training programs like theirs to ensure high standards and sustainability.

Transformed for the better through education while in prison, Sean Pica is committed to making up for lost time and building a sustainable prison education program that gives incarcerated individuals the same chance at success that he had.